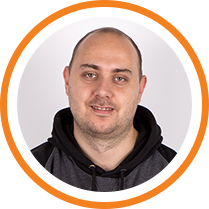 Frano Petric was born in 1988 in Imotski, Croatia. He received his Ph.D. from the University of Zagreb Faculty of Electrical Engineering and Computing (UNIZG-FER) in March of 2018. He received the Rector's Award in 2011 for his work on control of walking robots. In October of 2012, he started working in the Laboratory for Robotics and Intelligent Control Systems (LARICS) at the Department of Control and Computer Engineering at the same faculty, where he has since been involved in several international and national projects. Currently, he is employed as a postdoctoral researcher as part of the ADORE project. His scientific focus is on social and assistive robotics, particularly child-robot interaction and use of humanoid robots with children with an Autism Spectrum Disorder. His other scientific interests include autonomous systems, walking robots, computer science, and computer vision. He is also involved in science popularization activities of the faculty.