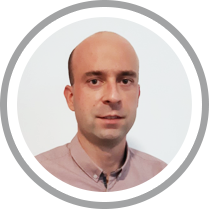 Tomislav Haus obtained his Ph.D. degree in 2017 from the Faculty of Electrical Engineering and Computing, University of Zagreb, for the thesis titled “Control of multirotor unmanned aerial vehicle based on moving mass concept” (mentor prof. Stjepan Bogdan). Since 2018, he has been employed as a Senior Robotics Engineer & Team Lead at Gideon Brothers, working on development of autonomous technologies for industrial robots. From 2012 to 2018, he worked as a Research and Teaching Assistant at the Laboratory for Robotics and Intelligent Control Systems (LARICS). During his stay at LARICS, he participated in numerous domestic and international scientific projects, including ASSISI_bf (development of an electromechanical system for ethological experiments on honeybees), EuRoC (development of autonomous technologies for unmanned aerial vehicles) and MORUS (development of an unmanned multirotor vehicle with internal combustion engines). In 2017, he was a visiting researcher at United States Military Academy West Point, USA, where he collaborated on projects related to unmanned aerial vehicle navigation and control. So far he has published more than 20 journal and conference papers.