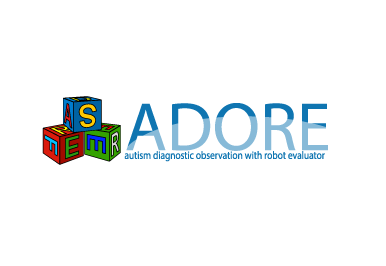 The main goal of the ADORE project is the development of a robot-based diagnostic protocol and validation of a robotic diagnostic assistant in clinical settings. The robots are used as ASD co-evaluators to help a human evaluator to assess a child's behavior objectively. To the best of our knowledge, such a robot-based ASD diagnostics system is the first of its kind.

The robot-assisted ASD diagnostic protocol consists of four tasks and is based on the Autism Diagnostic Observation Schedule (ADOS) which is considered to be the “golden standard” of ASD diagnostics. Within the tasks, the robot observes social cues such as eye contact, verbal activity and ability to imitate. Since our goal was to make the robot as autonomous as possible, we modelled the tasks using the Mixed Observability Markov Decision Processes (MOMDPs), which enables the robot to infer the information about the child and control task execution autonomously. On the protocol level, we use the standard Partially Observable Markov Decision Process (POMDP) model which enables the robot to choose tasks of the protocol autonomously and combine observations from tasks into a final assessment of a child’s behavior.

Clinical trials are performed at the Child Communication Research Laboratory, which is located at the Croatian Institute for Brain Research. During various development stages, more than 50 children have been introduced to the robot. Fifteen of them (7 developing typically, 8 with ASD) were a part of the latest study which showed that, given perfect observations of social cues, our robots are capable of identifying the behavior of the child.

Frano Petric presented the paper entitled “Towards a Robot-assisted Autism Diagnostic Protocol: Modelling and Assessment with POMDP” at the 8th International Conference on Intelligent Robots and Applications (ICIRA), held in Portsmouth, UK. The paper presented the system of automatic encoding of diagnostic tasks and is co-authored by Damjan Miklić, Domagoj Tolić, Zdenko Kovačić, and our colleagues from the Faculty of Education and Rehabilitation Sciences, Maja Cepanec and Sanja Šimleša.