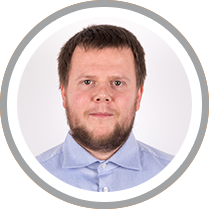 Antun Ivanović is a Ph.D. student and researcher at the Laboratory for Robotics and Intelligent Control Systems within the University of Zagreb Faculty of Electrical Engineering and Computing (UNIZG-FER). He graduated and received his master's degree in 2015 at this same institution and after that joined LARICS later that year. During his undergraduate studies, he received a Rector's award for the work entitled "Augmented human machine interface for aerial manipulators".

His research interests are robotics, unmanned aerial vehicles, aerial manipulation and motion planning. As a Ph.D. student, he participated in a EuRoC(European Robotics Challenge), MBZIRC2020(Mohamed Bin Zayed International Robotics Challenge) and MORUS project(Unmanned system for maritime security and environmental) He is currently working on several EU or nationally funded projects including Specularia, ENCORE, and AeRoTwin. In 2018, he was a visiting researcher at United States Military Academy West Point, USA, where he collaborated work related to aerial-ground cooperative manipulation.